As tours will operate rain or shine, participants are asked to dress accordingly. Unless otherwise indicated, comfortable walking shoes are recommended. All tours are covered by conference registration fees. Duration times listed for each tour are estimates. Participants are asked to meet at the TCU Place main entrance at least 15 minutes prior to scheduled departure times.

Participants will visit the North East Swale to learn about the ecology of the area and the measures being put in place to protect the prairie landscape.  Highlights include wildlife crossings along roadways and a storm water discharge fore bay. The protection of ecologically unique and sensitive areas within urban development boundaries is an ongoing and important issue for transportation professionals.  A large and significant area of undisturbed natural prairie within the City of Saskatoon is protected from future development, although it cannot fully avoid urban growth. The Saskatchewan River valley was formed by erosion of the landscape by glacial meltwater about 12,000 years ago. During this process several abandoned channels or "swales" were left stranded on the landscape, which formed unique, valued and protected habitat over varying depths of soft, compressible sediment.

Participants will visit two interchanges currently under construction within the City of Saskatoon - Boychuk Drive and Highway 16 and McOrmond Drive and College Drive. These road safety initiatives will ease traffic congestion and collisions, while providing accessible pedestrian and cyclist pathways. A design-build procurement process has been selected to undertake the work. A rock column foundation technique was used in embankment areas in order to reduce the construction time-frame.

Participants will visit two interchanges currently under construction located north of the City of Saskatoon. The Warman Interchange involves a new two-lane overpass for Highway 305 with on and off ramps, safety upgrades to the rail crossing and the realignment of about 5 km of four-lane divided highway. The Martensville Interchange involves the realignment of 4 km of a four-lane divided highway, a new two-lane overpass for Township Road 384 including on and off ramps as well as the reconfiguration of the Main Street Intersection. An extensive public consultation process took place to inform stakeholders about the project and gather their feedback towards the preliminary design. This is the first design-build procurement project undertaken by the Saskatchewan Ministry of Highways and Infrastructure; the project required the development of new design-build documents and specifications.

Participants will visit the site of the new North Commuter Parkway Bridge crossing the South Saskatchewan River. Discussions will explore challenges associated with delivering a complex project in a challenging geotechnical and environmentally sensitive area, subject to multiple levels of regulatory control. Participants will also learn about the treatment of contaminated land; groundwater considerations due to the presence of major aquifers; river engineering and experiences with earthen cofferdams. The P3 delivery model required optimization among geotechnical, bridge and construction disciplines to produce an innovative approach that allowed reduction of bridge length from 410 m (concept plan) to 268 m, producing significant savings for the project.

Participants will visit the new Traffic Bridge which reconnects Saskatoon’s downtown on the north side of the South Saskatchewan River with residential areas in the southern part of the city. This new infrastructure incorporates pedestrian transportation, new bike lanes, sidewalks, and multi-use pathways. Design challenges of this bridge replacement included maintaining the aesthetics of the original truss design of the first roadway bridge in Saskatoon. The project demonstrated innovation by re-using the existing 108-year old pier footings. Other challenges included archaeological constraints related to the proximity to the site of the wreck of a river steamer; construction of works on fill within the ancestral flood plain; and instability of clay slopes in South Saskatoon.

Participants will visit the Civic Operations Centre (COC), home to Saskatoon transit, and the City’s first Snow Management Facility, which has the capacity to store up to 1,000,000 cubic metres of snow. When the snow naturally melts, the melt water runs through an oil and grit separator and into a melt water/storm water pond. The melt water then goes through a series of specially designed baffle curtains before being discharged in a controlled fashion into the storm water system. The City of Saskatoon entered into its first public-private partnership with Integrated Team Solutions (ITS) through a competitive procurement process. Under contract with the City, ITS will maintain, repair and rehabilitate COC facilities for 25 years. 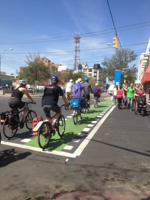 Participants will visit several examples of long-standing facilities and newly constructed river crossings, streetscapes, cycle-tracks and bike lanes. Saskatoon has long been regarded as an active community that embraces the outdoors. Capital investments into multi-use trails and a core-city of well-connected local streets have produced a strong community of people committed to walking and cycling for their daily travel. The City of Saskatoon has recently adopted an Active Transportation Plan proposing a series of investments to take active living to a higher level.